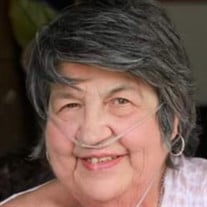 Diana Mary Suchara Ackerman, aged 78, of Warren passed peacefully into eternal rest on April 7, 2020. A devout Catholic, she was born in Hamtramck, Michigan to Stanley and Sophia Suchara on December 6, 1941. The oldest of 3 siblings, she went to live at her grandparents home with her mother, brother (Dennis) and sister (Marsha) after her father's death when she was 9 years old. Diana worked for Blue Cross Blue shield after graduating from East Commerce High School. Soon after she met John Ackerman and they married on September 21, 1963. They had 4 children Dawn, Denise, John II and Jeffrey. They divorced after 39 years, and Diana never remarried. Diana was a devoted mother, grandma and great grandma. She loved when the family was all together. Everyone was drawn to her. She was loved by cousins, her in-laws, and lots of nieces and nephews. She by no means was just a housewife though! Diana went to Cosmetology School and worked at Jean's Beauty salon in Detroit part-time for many years. She later did Market Research until she retired. Diana loved her family, but she also loved her girlfriends. One of her favorite things was to play pinochle with the girls. She also loved to read, do crossword puzzles, and watch television. Diana had an intoxicating laugh that will be remembered fondly. She grew ill a few years ago but fought hard to stay in her home and was successful. She will be dearly missed, as there are many fond memories with her. She will live forever in the hearts of her children: Dawn Manley, Denise (David) Kott, John Ackerman II(Susan Jacobs), and Jeffrey (Ashley) Ackerman; Her Grandchildren: Morgan Manley (Leavale Julius), Courtney(Jeremy) Kott-Forrester, and Charlotte Ackerman; Her Great-Grandchildren: Shanelle, Malachai, Hunter, Clara, Leavale Jr, Violet, and Emmanual; and her faithful, furry sidekick, Kylie. Diana was preceded in death by her parents, Stanley and Sophia Suchara, and both her brother, Dennis Suchara, and her sister, Marsha Suchara Ackerman. She will be laid to rest in a private cemetery burial at St. Clement Cemetery, Center Line, Michigan. A public memorial will commence at a later date. "Then they cried to the Lord in their trouble, and he delivered them from their distress. He brought them out of darkness and the shadow of death and burst their bonds apart." Psalm 107:13-14

Diana Mary Suchara Ackerman, aged 78, of Warren passed peacefully into eternal rest on April 7, 2020. A devout Catholic, she was born in Hamtramck, Michigan to Stanley and Sophia Suchara on December 6, 1941. The oldest of 3 siblings, she went... View Obituary & Service Information

The family of Diana Mary Ackerman created this Life Tributes page to make it easy to share your memories.

Send flowers to the Ackerman family.