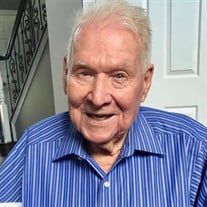 Frederick Henry Sankuer, 96, was called home to be with Our Lord on December 8, 2019. Fred was the third born child of eight to the late Patrick and Jenny (Roggie) Sankuer on April 27, 1923, in Warren Michigan, the place he would call home during his lifetime. Fred lived a full and active life. Soon after graduating from Lincoln High School, he was drafted to the US Army Air-Corp where he served as a heavy gunner engineer on B-17 and B-24 Bomber Aircraft over Africa and Germany during World War II. His 3- years of service from 1943-1945 led to 31 flying missions earning him several military honors including a distinguished Flying Cross, Good Conduct medal, ETO Ribbon with 4-Bronze Stars, Air Medal with 3-OLC’s. After discharge he returned to Warren and married the love of his life, Grace Celine Nowicki. His hard work ethics following the Great Depression and WWII kicked into high gear. He worked tirelessly building his family home where he and Grace would raise their 5-children. He continued to educate himself becoming a master auto mechanic and precision tool & die maker, which expanded to multiple business opportunities and ownerships. Fred was truly the go to “fix-it” guy. He never said I can’t do that, he literally skilled himself to do everything that life dealt him, including; auto body repair, auto mechanics, roofing, plumbing, electrical, construction, concrete, etc. and his attention to detail was legendary. Fred so loved his family and friends and spent most of his free time with them. He lived his life as a devoted Catholic, he loved God and his church and raised his family in faith. He enjoyed everything aviation including flying small aircraft and building model airplanes. He also enjoyed days at the lake repairing boats, boating and fishing. He was an avid pool shark, sharpening his skills at the local VFW Chapter. He read the newspaper daily and always shared a chuckle over the comic section. Predeceased by his wife Grace (Nowicki) of 64 years, daughter Kathleen (Eckhout), and siblings Lillian (Altman), John, Julie (Ungvarsky), Helen (Girling) and Rosemary (Fredericks). Survived by his children, Beverly (Pat Tobin), Christine Jones (Joseph Dawson), Fredrick (Carla) and Raymond (Darci), his grandchildren Kyle and Quinn Jones, Joshua and Jonathan Eckhout, Ashton, Lauren, Lane and Logan Sankuer, 5- great grandchildren and his siblings Patrick and Gloria Sankuer. Fred was proudly given the nickname “Chief” by his grandson Kyle and he truly lived up to that title. His smile was infectious, his heart was kind and his whit and humor were unsurpassed. Fred coined the word “Chachadeeta” which simply meant Good-Bye, as he would exit with a huge smile on his face. Visitation will be held Friday, December 13th at Rudy Funeral Home, 25650 Van Dyke Ave, Center Line, MI 48015, from 10am-12pm, followed by mass at St Mary,Our Lady Queen of Families Catholic Church (St Clement site) at 12:30pm. Interment St Clement Cemetery with Military Honors. Family requests donations be made to the Make-A-Wish Foundation. Please visit www.rudyfuneral.com to share a memory or light a candle.

Frederick Henry Sankuer, 96, was called home to be with Our Lord on December 8, 2019. Fred was the third born child of eight to the late Patrick and Jenny (Roggie) Sankuer on April 27, 1923, in Warren Michigan, the place he would call home during... View Obituary & Service Information

The family of Frederick Henry Sankuer created this Life Tributes page to make it easy to share your memories.

Frederick Henry Sankuer, 96, was called home to be with Our Lord...

Send flowers to the Sankuer family.