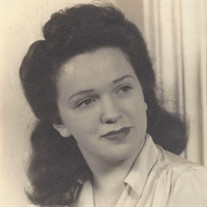 Gloria Gibson, age 92, of Warren, died on March 23rd at home. She is survived by her stepmother Virginia Buzzelli. Predeceased by her mother Marie, father Maura, and stepfather Erie Bird. Stepsister of Robert (Barbara), Joe, Late John "Tom", David (late Pat), and Kathy (late Joe) Chapman. Aunt of Chris, Robert, Daniel, Curtis, Tony, Joe, Connie, and the late Dennis. Many great-nieces and great-nephews. Gloria served in the U.S. Army teaching languages, retired from Ferndale Public Schools where she worked as a teacher for over 30 years, was an avid reader, rescued numerous dogs and cats. Gloria would pay to have her rescues spayed/neutered and found them new homes. She was also a foster mom to several dogs and cats. Visitation will be held at Rudy Funeral Home, 25650 Van Dyke, in Center Line, on Thursday, March 28th from 6 to 8pm. Time of service 7pm. Please share a memory or light a candle at www.rudyfuneral.com.

The family of Gloria Marie Gibson created this Life Tributes page to make it easy to share your memories.

Send flowers to the Gibson family.