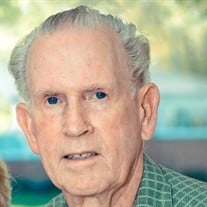 Roy Causey age 85 of Warren died peacefully at St John Macomb Hospital on April 17,2018. Roy was born on April 24,1932 in Harlan, Kentucky. On July 2,1955 he married Margie Pendergrass. She predeceased him September 17, 2012. Together they... View Obituary & Service Information

The family of Roy Causey created this Life Tributes page to make it easy to share your memories.

Send flowers to the Causey family.